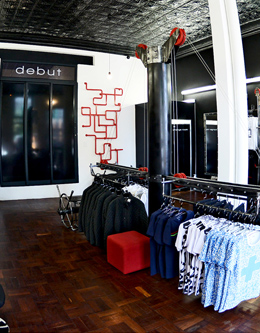 Debut is a clothing store located at 6 De Beer Street, Braamfontein - in the heart of Johannesburg. It is a lifestyle clothing brand which opened its doors on the 15th of May 2014.

The store was inspired by an infusion of music, culture and travel. The brand aims to target clientele who embody the urban lifestyle. The inspiration for the store was drawn from different parts of the world - locations such as Hong Kong, Amsterdam and the USA. Debut showcases an urban, edgy and hip range of clothing which ranges from graphic t-shirts to denim, jackets, watches, sneakers and accessories for both male and female. The Debut store contains various international and local street wear labels, which include their own in-house label ‘Debut’ as well as ‘People of the Night’ and ‘A.C.E’.